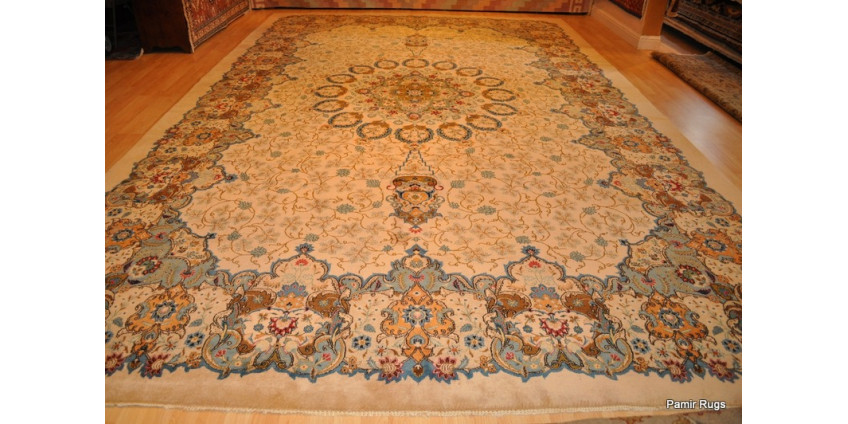 Persian rugs are referred to rugs made in Iran, although more countries like India, China, Pakistan even Afghanistan make very nice Persian design rugs but some Real Persian rugs are distinguished in quality and details among what we call them reproduced rug, for example almost every rug making countries make silk rugs but a real silk rug for Qum is and will be unique among silk rugs from around the world. Persian rugs come in many, many designs, quality and subcategories, almost every province and village in Iran has its own design and color combination, even the wool and the weave of the Persian rugs are diverse from one Province to another. Some of the most famous Persian rugs are Persian Kashan, Persian Sarouk, Persian Nain, Persian, Heriz, Persian Kerman, Persian Hamadan, just to name a few. The art of carpet weaving existed in Iran in ancient times, according to evidence such as the 2500-year-old Pazyryk carpet, dating back to 500 B.C., during the Achaemenid period. The first documented evidence on the existence of Persian carpets came from Chinese texts dating back to the Sassanid period (224 – 641 AD). This art underwent many changes in various eras of the Iranian history to an extent that it passed an upward trend before the Islamic era until the Mongol invasion of Iran. After the invasion, the art began to grow again during the Timurid and Ilkhanid dynasties. With the passage of time, the materials used in carpets, including wool, silk and cotton, will decay. Therefore archaeologists are rarely able to make any particularly useful discoveries during archaeological excavations. What has remained from early times as evidence of carpet-weaving is nothing more than a few pieces of worn-out carpets. Such fragments do not help very much in recognizing the carpet-weaving characteristics of pre-Seljuk period (13th and 14th centuries AD) in Persia. 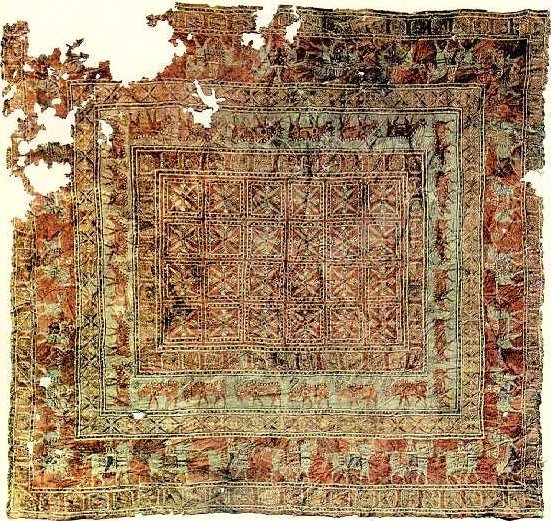 The Pazyryk Carpet, the oldest known surviving carpet in the world, 5th century BC.
In a unique archaeological excavation in 1949, the exceptional Pazyryk carpet was discovered among the ices of Pazyryk Valley, in Altai Mountains in Siberia. The carpet was found in the grave of a Scythian prince. Radiocarbon testing indicated that the Pazyryk carpet was woven in the 5th century BC This carpet is 283 by 200 cm (approximately 9.3 by 6.5 ft) and has 36 symmetrical knots per cm² (232 per inch²). The advanced weaving technique used in the Pazyryk carpet indicates a long history of evolution and experience in this art. Pazyryk carpet is considered as the oldest carpet in the world. Its central field is a deep red color and it has two wide borders, one depicting deer and the other Persian horseman.
However, it is believed that the carpet from Pazyryk is not likely a nomadic product, but a product of the Achaemenid period.
Historical records show that the Achaemenian court of Cyrus the Great at Pasargade was decked with magnificent carpets. This was over 2,500 years ago, while Persia was still in a weak alliance with Alexander the Great, who would later betray her. Alexander II of Macedonia is said to have been dazzled by the carpets in the tomb area of Cyrus the Great at Pasargade.
By the sixth century, Persian carpets of wool or silk were renowned in court circles throughout the region. The Bahârestân (spring) carpet of Khosrow I was made for the main audience hall of the Sassanid imperial Palace at Ctesiphon in the Sassanid province of Khvârvarân (in present-day Iraq). It was 450 feet (140 m) long and 90 feet (27 m) wide and depicted a formal garden. With the occupation of the Sassanid capital, Tuspawn, in the 7th century CE, the Baharestan carpet was taken by the Arabs, cut into small fragments and divided among the victorious soldiers as booty.
According to historians, the famous Tāqdis throne was covered with 30 special carpets representing 30 days of a month and four other carpets representing the four seasons of a year.

Wool is the most common material for carpets but cotton is frequently used for the foundation of city and workshop carpets. There are a wide variety in types of wool used for weaving. Those of which include Kork wool, Manchester wool, and in some cases even camel hair wool. Silk carpets date back to at least the sixteenth century in Sabzevar and the seventeenth century in Kashan and Yazd. Silk carpets are less common than wool carpets since silk is more expensive and less durable; they tend to increase in value with age. Due to their rarity, value and lack of durability, silk carpets are often displayed on the wall like tapestries rather than being used as floor covering 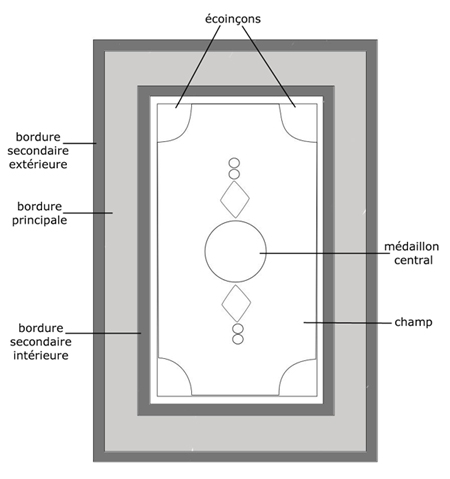 Elements of the Persian carpet.

Persian rugs are made up of a layout and a design which in general included one or a number of motifs. The Iran Carpet Company, a specialist in the subject, has attempted to classify Persian carpet designs and has carried out studies of thousands of rugs. Their results show that there have been slight alterations and improvements to almost all original designs. In its classification the company has called the original designs as the 'main pattern' and the derivatives as the 'sub patterns'. They have identified 19 groups, including: historic monuments and Islamic buildings, Shah Abbassi patterns, spiral patterns, all-over patterns, derivative patterns, interconnected patterns, paisley patterns, tree patterns, Turkoman patterns, hunting ground patterns, panel patterns, European flower patterns, vase patterns, intertwined fish patterns, Mehrab patterns, striped patterns, geometric patterns, tribal patterns, and composites.

Design can be described in terms of the manner in which it organizes the field of the rug. One basic design may serve the entire field, or the surface may be covered by a pattern of repeating figures. In areas using long-established local designs, the weaver often works from memory, with the patterns passed on within the family. This is usually sufficient for simple rectilinear design. For the more elaborate curvilinear designs, the patterns are carefully drawn to scale in the proper colors on graph paper. Each square thus becomes a knot, which allows for an accurate rendition of even the most complex design. Designs have changed little through centuries of weaving. Today computers are used in the production of scale drawings for the weavers.

Persian rugs are typically designed using one of four patterns: all-over, central medallion, compartment and one-sided. Some abstract asymmetrical design can be found but most of these can be described as one-sided or unidirectional.

There are a number of patterns which are found in Persian and Oriental rugs called 'motifs', these designs have different meanings and tend to be used depending on the area the rug was woven although it is not unusual to find more than one motif in a single rug.

Two basic knots are used in most Persian Carpets and Oriental rugs: the symmetrical Turkish or Ghiordes knot (used in Turkey, the Caucasus, East Turkmenistan, and some Turkish and Kurdish areas of Iran), and the asymmetrical Persian or Senneh knot (Iran, India, Turkey, Pakistan, China, and Egypt).
To make a Turkish knot, the yarn is passed between two adjacent warps, brought back under one, wrapped around both forming a collar, then pulled through the center so that both ends emerge between the warps.
The Persian knot is used for finer rugs. The yarn is wrapped around only one warp, and then passed behind the adjacent warp so that it divides the two ends of the yarn. The Persian knot may open on the left or the right, and rugs woven with this knot are generally more accurate and symmetrical.
Other knots include the Spanish knot looped around single alternate warps so the ends are brought out on either side or the Jufti knot which is tied around four warps instead. 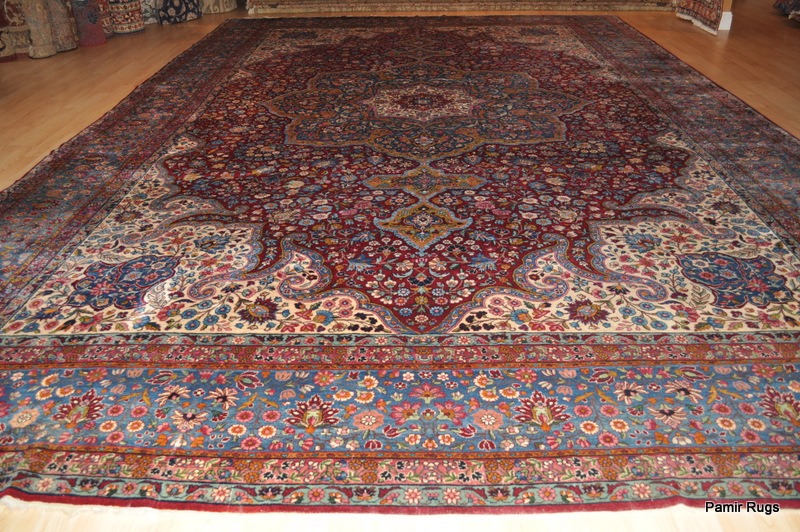 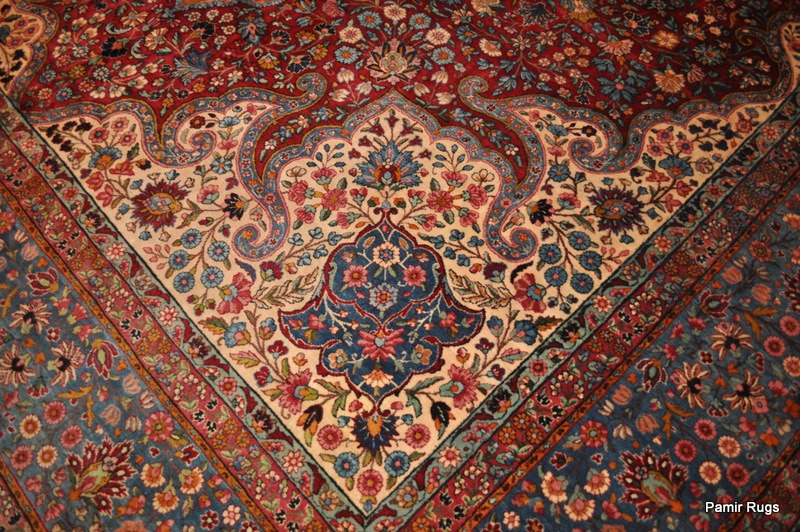 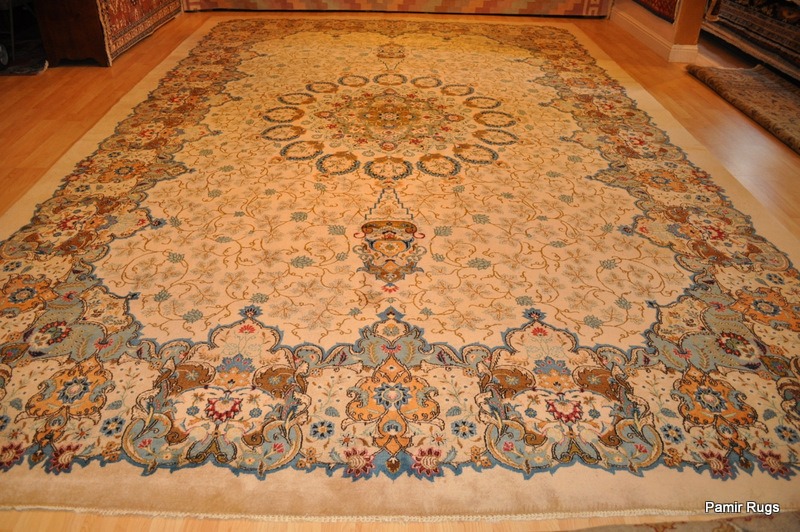 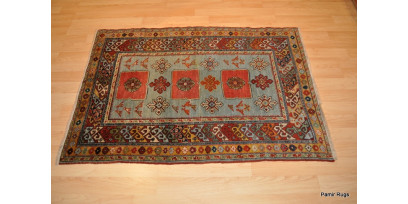 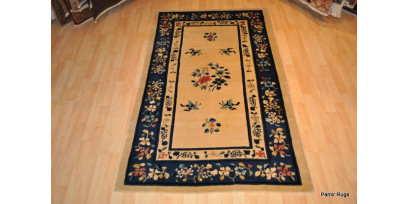 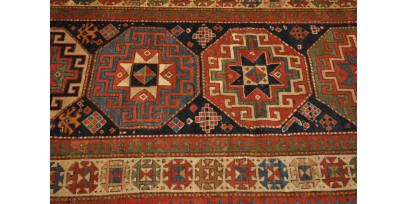 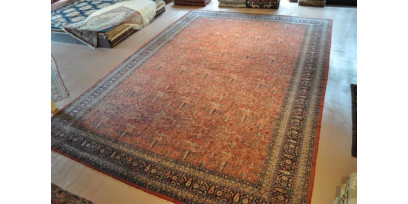 Ardabil rugs originate from Ardabil located in the province of Ardabil Province in northwestern Pers.. 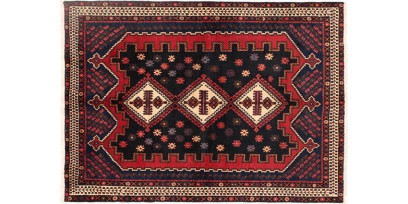 Made by the nomadic and semi-nomadic tribesmen who roam the town of Kerman in south east Persia, and.. 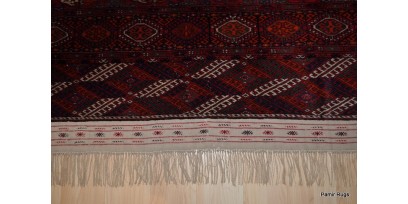